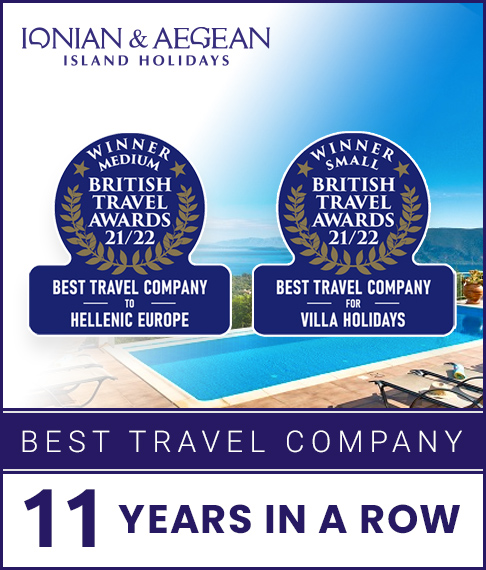 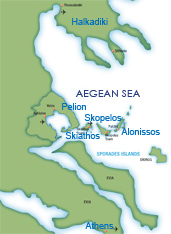 The summit of Mount Olympus provided Zeus with an excellent view of the world of mortals.

Although largely satisfied with the high mountains, green valleys, fertile plains and winding rivers laid beneath his feet, there seemed to be something missing away to the east. Maybe there was an element of sibling rivalry, for this was his brother Poseidon's domain, an empty expanse of blue, broken only by the curl of wind blown waves.

Reaching down from his throne, he gathered up great rocks and cast them far over the waves.

So were born the Aegean Islands, although modern geologists may have a different theory!

The island of reefs, a magnificent craggy coastline hiding secluded bays and narrow inlets, each with a sheltered beach fringed by pine forests and olive groves. Apart from the island’s eponymous capital, a bustling harbour with a maze of narrow streets, old churches and a Venetian fortress, Skopelos remains remarkably undeveloped.
View our properties in Skopelos

The remotest of the four inhabited islands that make up the Sporades archipelago, this is the haven we all dream about when life becomes too stressful. This narrow wooded island is about relaxation and tranquillity. There are many old trails, criss-crossing the island leading down to uncrowded beaches.
View our properties in Alonissos

With its 68 superb beaches lapped by turquoise seas, plus a lush, green backdrop inland, it’s easy to see why Skiathos has been a popular destination since its development in the mid 60s. Bustling Skiathos Town has managed to combine its development as a tourist centre and busy port, while maintaining its original character of narrow alleyways, old churches and Venetian houses. This is in contrast to the island’s interior which is still rural with olive groves, pine woods and aromatic hillsides that few visitors explore.
View our properties in Skiathos

The Pelion Peninsula is truly unique. The Aegean on one side, the sheltered inland sea of the Pagasitic Gulf on the other and the mountains of the Pelion in the north. Protected forests of oak, chestnut and beech are the crowning glory of the Pelion. Unaltered over the centuries, they cover every hillside, valley and ravine. The Pelion is unsurpassed for exploration on foot.
View our properties in Pelion Peninsula